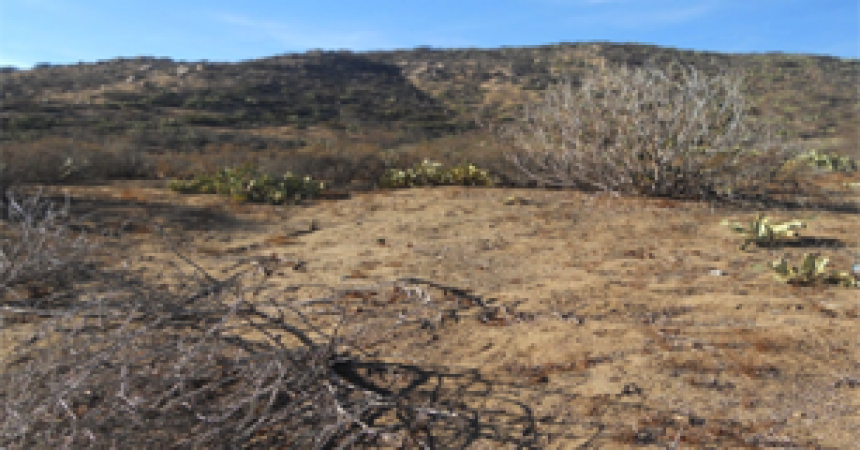 Zoo InternQuest is a seven-week career exploration program for San Diego County high school juniors and seniors. Students have the unique opportunity to meet professionals working for the San Diego Zoo, Safari Park, and Institute for Conservation Research, learn about jobs, and the blog about their experience online. Follow their adventures here on the Zoo’s website!

This week interns got the chance to meet research technician Ms. Sarah Motheral, who focuses on native habitat restoration in the San Diego area. Ms. Motheral took us to the Biodiversity Reserve behind the Safari Park, where we collected data from a cactus habitat planted a few years ago. The experience gave interns a glimpse of what it is like to be a field biologist showing us that plant conservation is just as vital as the conservation of animals.

In 2007, the biodiversity reserve was damaged due to wildfires resulting in a good portion of the cactus to be destroyed. Many native animal and plant species were directly affected by the wildfires. Specifically, cactus wrens depend on cactus for nesting, but due to the fires much of the cacti were destroyed. Shortly after the fires, Ms. Motherall along with her team began a restoration project to restore the cacti habitat for the cactus wrens. Interns were given the task to measure the height of each cactus in the area as well as count the number of cactus pads. The data collected was then recorded on data sheets created by Ms. Motheral.

In the reserve, not all the cacti were tagged with many of the larger cacti not having any sort of marking by the biologist. Due to the vast amounts of cacti planted throughout the area, it is hard to mark and record all individual plants. Pictured above is one of the cacti marked by Ms. Motheral’s team in order to monitor the general growth progress throughout the area.

Each team had a ruler for measuring the height of each of the marked cacti planted in the restoration area. The information collected was recorded, and would be later recorded into the original data base which contains all of the data recorded throughout the years for each individual cactus.

The task of measuring the height and growth of each cacti was not as simple as it seemed. Imagine having to plant a large amount of cacti on a huge reserve and collect the data of all the cacti by yourself, it would take forever. Field biologists work in teams in order to do their projects much more quickly, which allows them to collect and record data much more efficiently.

Pictured above is one of the many cactus plants located in the restoration area. Most of the cacti interns measured had over 20 new growth pads, which demonstrated significant growth. When asked about her work, Ms. Motheral said that one of this was one of her most successful projects that she has been a part.

In the above picture is one of the cactus plants that had completely dried out. When these plants were found, interns left a blank space on the data sheet which indicated that the plant was deceased. With the widespread drought throughout San Diego County, even cacti, which are highly adapted for an environment with little water, are being affected. Ms. Motheral and her team are closely monitoring the affects of the drought on the habitat and the cactus wren.